Shepherd to the Stars

Order of the Echo 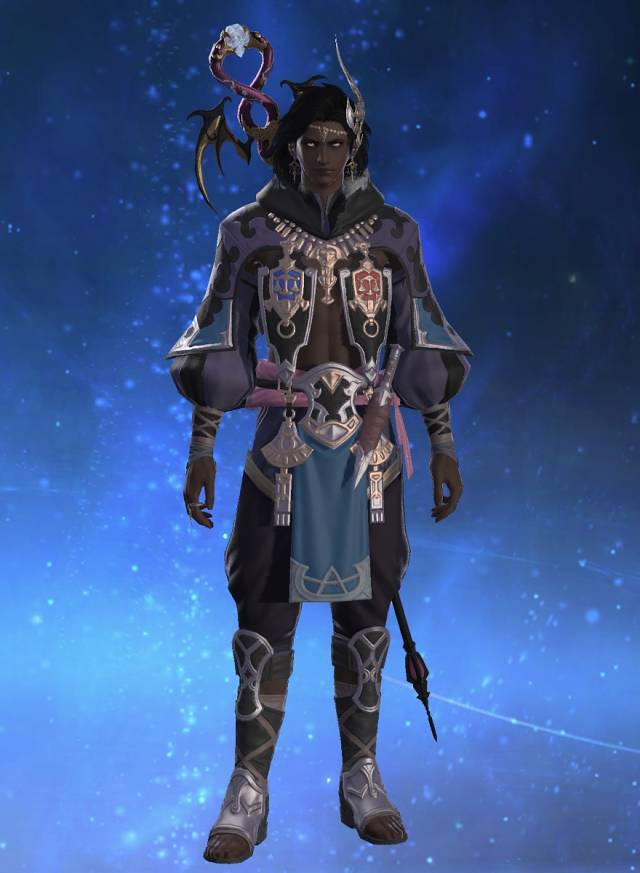 Cenric was found at Thal’s Respite as an infant, completely alone. Immin Asher (a wandering medicine peddler) found him while mourning his wife. Although he had no way of knowing Cenric’s origins, Immin believed the child was compensation from the Traders for the future he'd lost with his spouse.

Growing up, Cenric was very reserved. He acted as an assistant to his adoptive father, which initially meant making potions to sell. As time went on, he started learning about medical procedures and how to tend injuries without the luxury of conjuring. Cenric was desensitized to bodies and death from a very young age as a result. Perceived morbidity, looks, plus constant traveling earned him few friends. Occasionally there would be rumors that he was voidsent or a son of Thal.

When Cenric was 14, he and Immin reached a village on the outskirts of Thanalan. There were unique resources to collect, so they remained for some time. Partway into their stay plague struck. The two did what they could, but when people started dying panic took the community. A small mob, convinced that the situation was Thal demanding tribute, tried to ritually sacrifice Cenric. Immin saved his life but lost his own. Cenric escaped into the desert.

For the next few years Cenric made a living conning customers with medicine of dubious quality. This resulted in the death of at least one child, and following a confrontation with the grieving mother Cenric suffered a total mental collapse. His memory surrounding the Calamity is hazy, although he remembers being driven by hunger to begging in the streets.

Cenric became seriously ill a year before his adventure began. The irony of his situation drove him to hysteria and he prayed obsessively at an altar to Nald’thal. This involved begging for mercy, begging for death, believing himself a demigod, believing himself an agent of destruction, lashing out at the Traders, lashing out at others, etc. The affair lasted nearly a full day.

Cenric was knocked unconscious (with very little effort) by the nearby clergy in order to remove and treat him. A visiting thaumaturge named Memesu examined Cenric and found he had tremendous aetheric potential. This confirmed nothing, but she was able to direct Cenric toward Ul’dah.

Cenric begins as very cynical, although this shifts. Due to his past he craves luxury and status. His previous escapades as a con-artist have left him with a strong desire to atone, so he uses the violence of black magic to protect others. He has a decent education due to his upbringing and the time he spent among priests, although there are gaps. He tries to show off more when he’s insecure.