Survivor of the Song 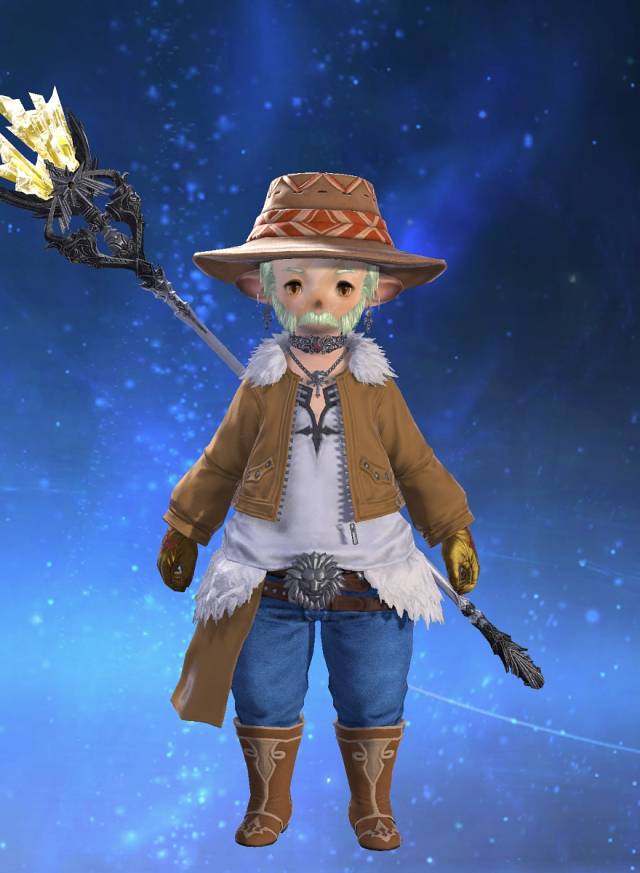 He was once a powerful Hyur whom roamed Gridania and used his magic to help the land and its people. One morning, he found a beautiful Elezen woman who was unconscious and naked out in the garden. Shocked and confused, the Hyur slowly approached the Elezen. The moment he reached out his arm around her, his skin began to burn. The stranger awoke. The poor man was screaming in pain, his limbs began to crack and shatter.

There was a dark aura that surrounded the Hyur's home. It felt like ages as his entire body contorted violently. Then just in a matter of seconds the darkness was casted away, like a pulled curtain welcoming the sunlight. There was no sound and although he saw the light, it was slowly fading as he felt crushed in the mulch of his garden. The pain has numbed him and there was nothing left to do but lay in despair.

A cold breeze ran through his cheek. At first he could not move but managed to slightly move his left shoulder. He was thrown off by how much bigger the stairs of his front porch grew in size. The groggy mage slowly turns to pick himself up. All thanks to the giant pumpkin in his patch. This was very odd because
realizes the garden is a bit taller than he remembers. His hip and knees made him have this strange balance as he walked inside his front door.

What foolery is this?! The doorknob was now above his head. He remembers about the strange Elezen and turns to see if she was still out in the front yard.... however, there was nothing but a large pumpkin patch. As he turns around to walk inside his home, he realizes that his furniture is also taller than him. Has the poor adventurer gone mad?! He rushes to the restroom to run a bath. The tub was now taller than the mage. This is just a strange dream...surely! He pulls himself up to the tub and before the skin touched the water, he let out a horrific scream. The reflection of the water reflected a chubby face and large pointy ears!

OH NO, I HAVE BECOME A LALAFELL!!!

He runs upstairs to his room to retrieve that Fantasia that was rewarded to him after helping a villager from a band of goblin thieves. He chugged the potion and went off to bed. What in the seven hells is going on! This Fantasia should reverse this strange magic! Otherwise, he'd be known as the weak mage who could not ween off a silly little curse. He shut his eyes and drifted off to sleep. The morning came like nothing ever happened. The light crept in and woke up the troubled adventurer. As he raises his arm to dust the sleep of his eyes, his fingers were still soft and fat. There is no way he can stay here anymore. This curse has shamed him and caused him to become a refugee from a prison of his own mind,